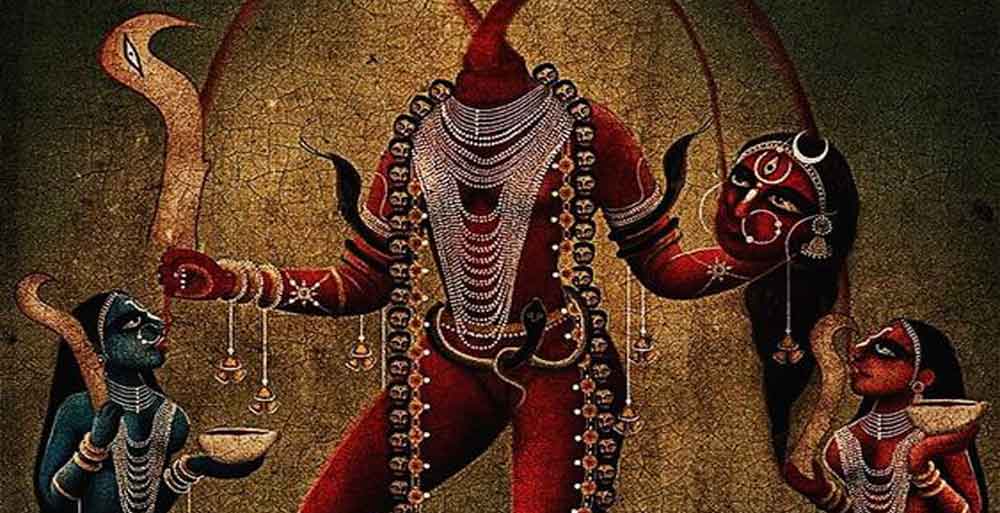 “Oh Goddess Chinnamasta
Lust and desire is in your blood
You show us the place where lust and desire belong
You feed the Chandra Nadi,
You feed the Surya Nadi,
You are the dark Amvasya between.
The movement of desire do you teach
Mistress of lunar and solar maneuvers you be,
You reveal the natural secrets of sex
By showing us how to bow down
And let the tides of nature move us
To you we bow.“

Chinnamasta delights in trampling upon two lovers locked in sexual embrace. She tramples upon Kamadev, the god of desire and his lover Rati, who rides upon him fiercely.

Chinnamasta is a nourishing Goddess. She nourishes the 3 energy channels of the spine, known as Ida, Pingala and Sushumna. The passive and active channels, along with the balancing power between the two, which is what Chinnamasta nourishes.

The middle channel
that the Goddess Chinnamasta
herself drinks from,
is the bridging union
of the two polarities of desire.

THE GODDESS
OF SEXUAL ENERGY FLOW

These are the energies of receptive, active and balanced equilibrium.

Let us take the stark example of day and night. They are dual expressions of the same energy, moving in opposite directions. The place of equilibrium in which they meet is twilight. A third principle is created in the meeting of these dualities. Twilight is not always obvious and easily passes as a moment of little consequence. To the Tantrics it is a moment of great consequence in which the central line between is nourished. Twilight is a time for Tantric ritual for this very reason.

The practice of Hatha Yog
relates very much to working with
receptive & active principles of energy
& discovering the place
where they meet.

Chinnamasta mixes all things together. She is the secret third element where the receptive and the active desire meet and fuse together.

Her form is graphic,
which sharply & directly emphasises
the laws of desire
& energy exchange.

Chinnamasta Sadhana is instinctual and very matter of fact. In fact Chinnamasta is the pure essence of instinct, found between the expression and reception of instinct itself. She waits for the meeting, in the secret twilight place.

All are welcome to join our healing ritual dedicated to Chinnamasta.