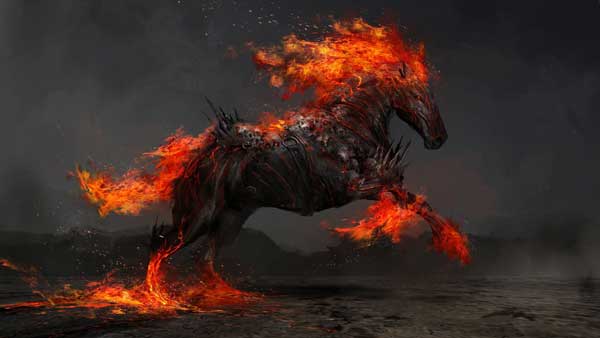 As we move through the year celebrating the tantric festivals we  would like to introduce you to a lesser know divinity, and yet a very important one within the Tantric system: Hayagriva.
Hayagriva is the Horse headed God, and the full Moon of August is celebrated as his birthday in the ancient Indian festival known as Hayagriva Jayanti, the birthday of the Horse-headed God.
Tantric law has its roots deeply at the base of this festival, mapping out the mythological and energetic significance of this day that honours the Horse God.

Tantra goes into practical and magical invocation of the Horse energy by specific Yog practices to awaken our own inner Horse power and raise the Kundalini energy into full consciousness.

The Horse breath is a pranayama (breathing) practice that  is practiced upon this ritual Moon.
It is s breath that simulates the sound of a horse, this pranayam stimulates the nerves connected to the third eye and assists in giving one insight and vision into the two halves of ourselves (the dark and light parts of each one of us) and how they relate to each other.
The Chorrah, or Horse challana (movement), is a Tantric Mudra of moving as if one were upon horseback. There are numerous asanam in which this is done, but mostly it is performed in the squatting position. Along with inner horse Mudra these practices will be woven into this nights ritual.
On this night, Tantric wisdom harnesses the planetary energy that is present on this lunar junction. The lunar house named Ashvini is the Horse constellation that is touched upon the astral plane by the August full Moon. It gives us spiritual access to the powers of the Horse.
The Horse constellation is connected to the star brothers, the Ashvins, who are the divine healing horsemen.

The Ashvins are two healing twins who ride the starry heavens. When their influence is in orbit, they bring dead parts of us to life.
The Horse Stars bring power to those places that have fallen into Tamas (resignation). These Healing star brothers are the representatives of Usha, the Goddess of the dawn who stands for the birth of new things.

These are the energies that we shall be working with upon the astral plane on this coming Full Moon.

The Human & the Horse

The Horse is a powerful solar animal.
The Horse has an unparalleled stamina, perhaps for this reason the Horse has been used by humans for transportation. Once it was common practice to own a horse as a form of fulfilling labour duties and providing transport.
The grace and elegance of a horse is still something admired and much sought after and represented in the culture by things such as fashion icons or horse racing, dressage, festival parades and such.
The beauty and capabilities of the horse may well have been something working in its ill-favour as horses become an often mistreated ‘product’ of selfish human satisfaction.
Perhaps this relationship between the human and the Horse mirrors our own inner misbalance between the human and the animal (horse) sides of our nature.

The Horse headed god steps-up upon this ritual festival to reveal the balance of nature within ourselves; the balance between the instinct of nature and the human will.

The constellations are in favour as Hayagriva the Horse headed man opens the portal of balance upon the astral plane at the Full Moon in August.

The human animal in its potential has at once its hands in the ‘civilised’ world and its hooves upon the green grass of nature.

The confining and domesticating of wild animals is something that we see played out in a larger scale. The captivity of animals to exist without their natural climate in which to express their natural instincts is something that in our modern culture we may have got completely conditioned to.  We might be so used to it as to even take it as a normality.

It is worth recalling that, the Western project of Enlightenment has been one of domination of Man over Nature, as opposed to living in equilibrium with nature – the objective of ‘Eastern Enlightenment’ and in particular of Tantra.

The reigning in and confinement of instincts is equally paralleled in the human.
Our human nature may have become confined within religious and spiritual dictums, or it may have been harnessed to pull the cart of commerce and capitalisation as the authentic human being gets overridden by other gods and myths.
Many things we might take to be normal are brought into question when and if natural law unfolds. Tantra is the path of attempting to reveal and unfold Nature’s Laws within ourselves.

THE MYTH OF HAYAGRIVA

Hayagriva is mythologised as a great yogi who acquired immense power, which he couldn’t handle and therefore ended up misusing.
The myth tells how of he fell into the shadow of unconsciousness and threatened the very existance of creation. Hayagriva was a black horse headed yogi who had become so powerful that the power went to his head. He was driven by one-sided unconscious forces that were heedless to any effect, for the unconscious shadow was outside of the eye of awareness.
Unstoppable was he in his destruction, just like the horse that is able to run at great speed without getting breathless. This is why Hayagriva represents the unstoppable force of Prana.
By his unstoppable force he reigned darkness upon the world, so much so that he even caused the sun to fall.

The world threatened to fall into complete darkness as the black horse ran amok in his self-glorifying dance of destruction. In this state Hayagriva represents the unconscious use of power without a balanced natural will to guide him.

From the celestial spheres above Hayagriva was met by the other side of his shadow, his light form, a white horse that had galloped along with him all along, but outside of Hayagriva’s consciousness.

It is sometimes so, that the unconscious shadow-forces possess one and create a darkened life void of awareness.

The black horse suffered for his relentless blindness and held a secret prayer for salvation from his dead ended path. And so the white form of Hayagriva was called forth and into awareness when the mindless shadow rampage had reached the furthest extent of blindness possible. A war and struggle of epic proportions between the two was brought forth until a balance between shadow and light was restored.

Tantricly speaking, once the forces of the shadow become known, they can be gradually and carefully integrated from the unconscious and often destructive levels they play out in our lives. Once seen, known and worked with, our shadow parts can be put to use creatively to unfold in more constructive and mysterious ways of using power in our lives.

The integration of the shadow, the core objective of Tantra, is symbolised in the myth of Hayagriva.
Seeing the Shadow in wakefulness and not in a dream state that it so easily casts upon us is a grand undertaking.

The Black Hayagriva represents unconscious forces in the shadow such as jealousy, selfish interest over others and the will to be superior. These being all powers that can’t be stamped out, but powers to be redirected and liberated from unconscious programs and traumas that give them their birth and power. They become creative forces when the two horses, black and white, are unified and work with each other. This is the birth of the Horse god within us.

It is the unified Hayagriva who carries the Sun up each day at sunrise and lets her rest at night. He comes to know both parts equally, light and darkness, and doesn’t try to keep the Sun down in the night nor up during the day. He accepts the natural existence of both and lets them express themselves equally.
Representing the strength of our prana and how by balancing the black and white horses of breath – the in and out breath is implied here – we can raise Shakti from the unconscious levels to the levels of awareness.
The unified Hayagriva is the inner alchemy of the black and white horse – the objective of the ritual gathering we will undertake on this Full Moon.