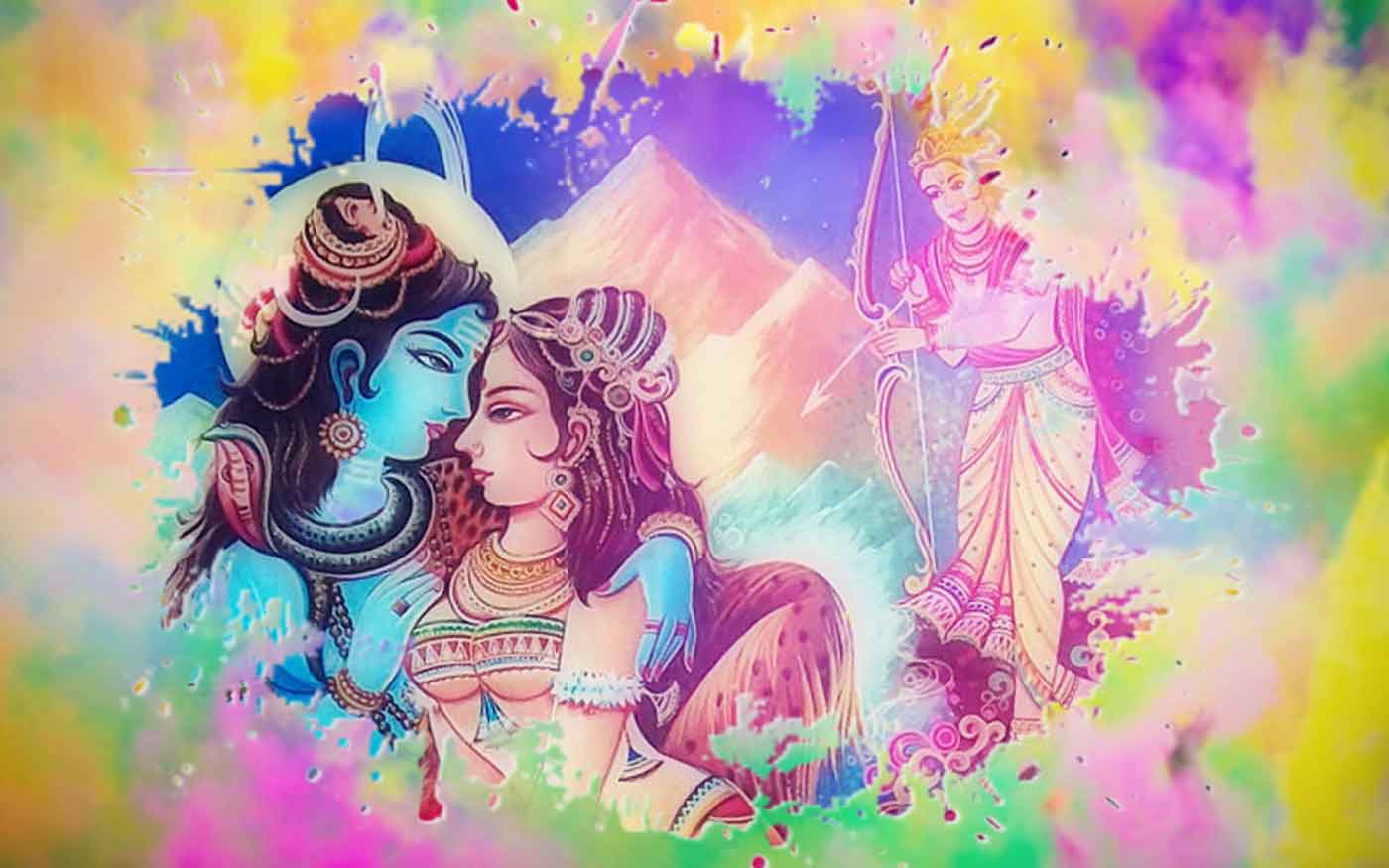 THE COLOURS OF LOVE IN THE CHAKRAS

The story of Holi begins on Vasant Panchami – Vasant Panchami is a festival on the 16th of February that begins to welcome the spring. 40 days hence – of Vasant Panchami is Holi – which occurs on the 28th of March. Holi is the first full Moon of the bright half of the year. Having passed the spring-equinox the days exceed the nights in length and the first lunar rays of spring are transferred to us on earth on this Purnima day.

Holi is known as the famous festival of colours – where people throw colored powder on each other. People also throw water mixed with different coloured powders upon each other in a game like manner. The festival of Holi has become known worldwide in recent years. Usually Holi is understood as the celebration of life and colour, but what does this fun filled festivity of playful games signify for Tantrics?

The Story of Holi

There are variations of the stories surrounding Holi, from the colour full game of Love of Radha and Krishna. To the cloak of immortality saving the life of Prahlada from the designs of his evil auntie Holika. The story about to be told, itself has its own slightly varying forms. The essence of the Story that follows is clearly spelled out as the rebirth and awakening of colour and sound.

The Story begins with Love.

Pharbhati was the incarnation of Shakti, the earthly manifestation of Shiva’s eternal love. She is the manifestation of Adiparashakti (the essence of feminine power) that had taken form into the physical plane of manifestation. She was in Love with Shiva, but Shiva was so aloof and remote – given to continuous yogic practices and austerities in far off places. He seemed to be far beyond any romantic sentiments – dwelling in Adiparaparush (the great soul beyond). Though Shiva dwelt in the manifest plane of earth, he had traveled back spiritually to the essence of the seed of spirit.

Notice how the opposite of Shiva and Shakti collide here in Adiparashakti and Adiparaparush.

Pharbhati was an incarnation of Shiva’s Lost Love Sati. After losing his Love and going half mad in rage and longing, Shiva was more ardent than ever to enter into the ultra-terrestrial realms beyond the reach of the human hand.

There was no way that Pharbhati could arouse any interest from Shiva. The Devas had the motive of helping Pharbhati in her endeavour, for it had been foretold that together they would have a child who would save the world of the Devas from Asuraic forces (The Asuras are beings that work for division and the Deva’s are beings who unify. Often translations relate them simply as Demons and Angels but such transposed terms have other connotations that are not descriptive of the principles of Asura and Deva).

Kama was summoned by Pharbhati to help her win Shiva’s Heart. Kama is the god of Love who shoots arrows made of flowers from a sweet sugarcane bow. Kama’s arrows arouse desire in anyone struck by them. Shiva was so far gone into the ultra-terrestrial worlds that he seemed impervious to Kama’s arrows of desire. Kama and his two wives Rati and Priti, each one representing pleasure and longing.

Rati and Priti tried their utmost to coax desire for Pharbhati out of Shiva, they tried with all their powers and charms but to little avail. Shiva was ever so slightly disturbed by their attempts that he opened his third eye – and like a bolt like beam of concentrated rage, he shot a glance at the god of desire and burnt him to ashes, with desire gone there was no hope of Union.

Indeed without desire the whole creation was in peril. Pharbhati was heartbroken at the prospect of failed love with Shiva, equally sad and angry were the-now widows of the God of Love. It took 40 days of wild feminine rage and tears to finally melt the heart of Shiva, and when it did melt he restored Kama to life and entered into eternal embrace with Parvati.

The resurrection of Kama (desire)
and the resultant Union of Shakti and Shiva
is the day upon which Holi rises and falls.

Holi marks the arrival of spring and the colours of life ready to come into flower. A place where stories are not only written, but lived.

THE FESTIVAL
Melodies of Love

Holi takes place upon the First full Moon after the spring equinox. The days are now longer than the nights and this first Full Moon of the ascending season marks the lunarly beginnings of Spring. The medium of the full moon reflects these forces of colourful flowering to us – Nature affects the hormonal currents as flowering abounds in the plant, animal, human and spiritual worlds. The beginning of Holi began 40 days previously on Vasant Panchami, which is Tantricly known as the ritual day of Sarasvati Puja.

Sarasvati is the Goddess who plays the divine melodies upon the Veena (a sitar like musical instrument) the Veena is a seven stringed yogic instrument that has deep effect upon the Chakric system.

Sarasvati is often regarded as the Goddess of music and wisdom. She is the beloved of the creator Brahma. She is the one who receives the seed of creation and gives birth to the fruit. Her fruit is the music of Love.

Sarasvati plays all the Ragas (melodies) for the 40 days that the saga of Love goes on for, (from her Puja day on Vasant Panchami on February the 16th – unto The Day of Holi on the March the 28th. All the notes and scales of Love were played out in the eternal story of Love and its endless trials and tribulations.

When the final Union came about
between Pharbhati and Shiva,
the complete scale of colours
that had been played for 40 days
erupted into the festival of Holi.

Tantric ritual traditionally has kept this Holi night for the practice of inner and outer colour and sound. The intonations of each Chakra along with inner and outer work with colours is ritualised in a colourful and enlivening practice of awakening to Life and Love.

The effect of these practices is to open the potentialities of the Chakras. The Chakras are doorways to the spirit and can be accessed with the keys of sound and colour. Working with the chakras opens the psycho-physical doorways of our being.

Emotional and physical memory is stored in the chakras and gives shape to the reality and dreams we live through in our lives. Tantrics understand that we create our lives through the lenses of the chakras. By working with the Chakras, we create the possibilities to open to the spring like blooms of Love and uproot the dead and faded bouquets of yesteryear in the healing journey of life that we are all upon.

Like the Music of Sarasvati, the sacred song and its colourful sounds are infinite and eternal. There awaits the possibility of magical and hitherto unknown mystical tones when we open the doorways of the chakras into the melody of expansive resonant being.

This ritual
will be a focused evening
of working with the colours and sounds
of the chakras,
musicians and artists of the soul are welcomed.

Please note | For this ritual you will require seven pieces of paper that reflect the rainbow of the colour spectrum: red, orange, yellow, green, blue, indigo and violet. You can be creative and use scarfs or colour in upon pieces of paper. We will be engaging in some powerful and lesser known tantric mudras of colour, known as Rangi mudras – literally the practice and attitudes of colour.