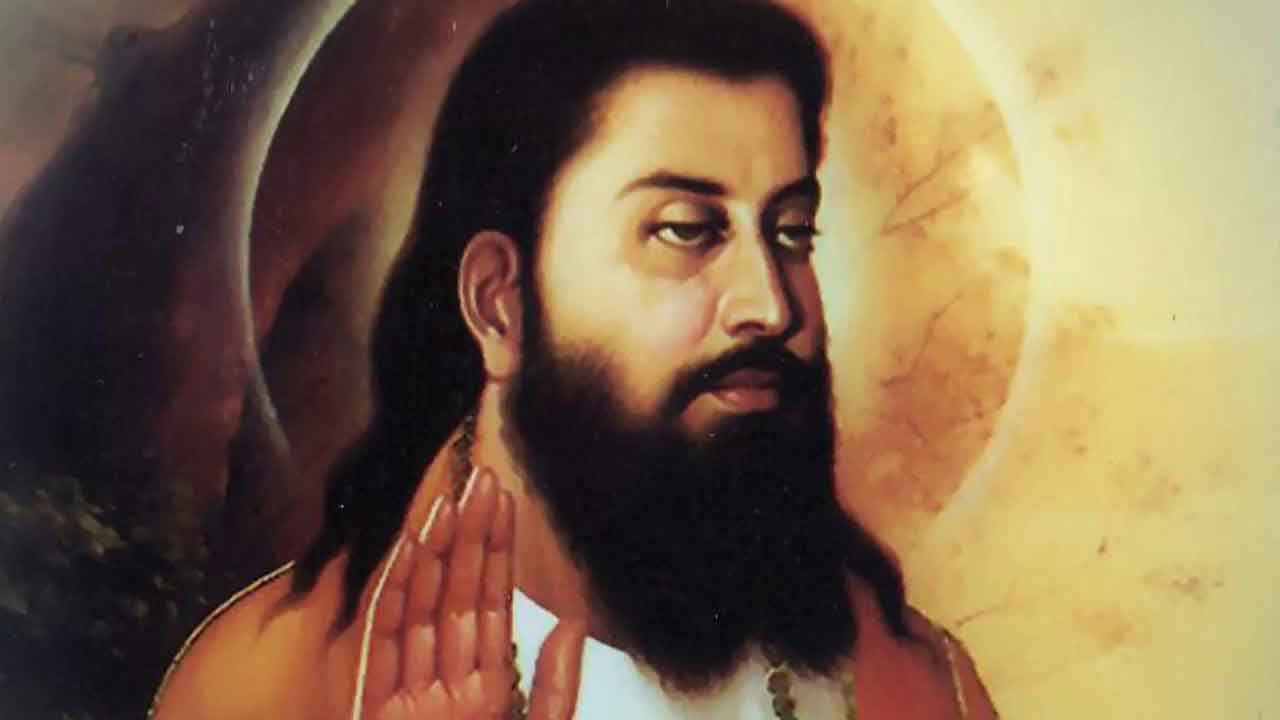 Guru Ravidas was notable as one of the most radical teachers ever to appear in India. He was a forerunner of justice, though his name is certainly not forgotten, his acclaim deserves more mention. Not a political revolutionary but a mystic poet, Ravidas brought together a Tantric vision of living spiritually within the heartless confines and structures of life.

Let us investigate the Vision of Ravidas with a question or two in our Heart – “Has Ravidas’s vision become manifest in the world?” Maybe the more important question is – ”What vision do we hold as we wander through our lives?”

Perhaps in a country like India, where 20 percent own 80 percent of the wealth and influence his teaching, the figure of Ravidas is not popularly or widely presented by those in power. Regardless of this, his influence still exerts itself in spiritual and social fields. Tantrics hold him in high esteem as one of the true wisdom teachers who addressed equally the balance between spiritual and social life.

Figures like him rock the boat of established order and are forerunners of spiritual and social revolutionary maneuvers. Reactions such as discriminatory assassinations, religious unrest  have risen as reactionary measures against his vision of unity. But equally have sectarian obliterations of modern oppressive social/religious structures grown from the seeds he planted in the unified Heart.

In his life and in his wake Ravidas left a profound legacy that stood for both inner and outer spirituality. He is revered by Tantrics for his no bullshit vision that exposed and continues to expose spiritual hypocrisy.

His vision was that
the outer structures are a reflection
of our inner constructs.
Like an architect of the soul
he shows that sometimes
a pause is needed
to review the framework
and its reflection.

He was a cobbler, fixing and making shoes, considered a low-class and second-class being in the elite view of the spiritual society in which he lived. He continues to be a profound influence even unto this day and age. Organizations that support his teachings have stood up greatly in recent years against religious and class discrimination.

Though his poetry still exists, much was destroyed by forces that opposed his vision equality and favored their elitist structures to stay in place. The life of Ravidas was a testament to the vision of undying truth within all beings – a truth that lies oppressed beneath the man-made separative constructs that are rampant in organised societies. That vision of truth that Ravi Das saw is known as the inner Guru Tatva – that is the element of the true power and weight of the spirit.

The highly discriminatory caste system and organised religion in India was something that was held in lowest regard  by him. He saw it as something that caused nothing but sickness of repression. Some states in the modern day  India to this day, still do not allow so-called lower-classes to own land or start businesses. He did stare right through the high caste oppression of the priestly classes, both in terms of its class discriminatory measures, its oppression of women and religious elitism.

In today India things have not changed greatly since his times. There are still temples that are out of bounds to lower classes. There are still religio/political systems that carry out cultural oppression and strategic genocides of lower classes. Ravi Das recognised that the patriarchal dominance was so ingrained in the systems of India, it was so established that it seemed to be the norm.

If anything can be said of Ravidas, it is that he had the vision of the Teacher of Wisdom, who saw through the sick structures that prevail in society. His followers are marked by his vision of seeing beneath the surfaces and carry his trait of exposing injustice, left right and center.

Ravidas is perhaps best known for his mystical poetry, his verses have found their way into several prominent scriptures of India. Ravidas was a romantic poet who spent his time seeking out and spending time with mystics, babas and and Sufi mystics, following the ways of magical vision and composing mystical verse. His verses enumerate upon romantically spiritual themes, revealing that love and grief go hand in hand. Grief as a refining sobering force of awakening, is sprinkled throughout his poetry.

Ravidas rejected
all spiritual definitions,
he saw beyond forms and techniques
and followed the way of the heart.

There have been numerous speculations whether he was Sanguna or Nirguna. Sanguna means to worship and celebrate the forms that Shakti takes, Nirguna means to only focus upon the supreme reality with no reference to manifest or visible form.

To Ravidas both views were correct, both views were equally important and irrelevant at the same time. Indeed he stood firm to see the enduring truth beyond dogmatic forms and accepted ideologies.

Many of the so called central cities of religion and Yoga in India today are still headed by the higher priestly classes. These cities are regarded by outside Westerners who don’t know about the codes and history of religious oppression in India as the holy cities – in the unified vision of Ravidas, little could be further from the truth. Within India there are temples where lower classes and women are not allowed. Westerners and Women are readily admitted but natives risk violence, persecution,  livelihood and even their lives if they would try to enter.

As long as the oppression of the caste system and socioeconomic inequalities across the world still occur, Ravidas will always be relevant.

Ravidas
was a true mystic
who spat in the blind eyes
of ideology.

His vision was that Love is the truth that is constrained and strangled by social and spiritual segregations. He had the vision or Tadaruup – that is the vision that there is only one collective Heart together and no separate hearts. He was profoundly compassionate and felt the suffering of the oppressed heart, but rather than wallowing in pity he stood up and spoke things that were so reactionary that they had never been spoken.

He engaged a whole new courageous movement of equality within spiritual and social contexts – influencing many poets and mystics down the line. The Sikh religion has its origins with Guru Nanak. Guru Nanak was said to be a friend of Ravidas and came under Ravidas’s influence to compose the verses of spiritual poetry, the poems of both mystics share similar qualities of devotion and revolt against the bigotry of the time. Without Ravidas it is quite possible the Sikh tradition would never have come into being as Ravidas put out his influence upon Nanak.

This has a sad irony to it because the Sikh religion itself as it gained status became a grand modus of oppression of lower classes itself. Itself withholding the rights of land, and commerce and creating religious segregation, or allowing lower classes inside its temples. The Sikh religion as it developed became a pinnacle of patriarchy and abolished the Goddess while looking down upon the ancient pagan practices and rituals as lesser superstitious. The writings and developments of Sikhism can be seen to develop along the passage of time into even more constrictive patriarchal forms, becoming even military. It can’t be refuted that the Sikh military has been a profound source of power for saving India from invasions and upholding justice. The source of its teaching must be acknowledged and its injustices must be exposed if we are to really look with the humanitarian vision of Ravidas. Ravidas in his romantic verse speaks time and again of the need to humble and crumble the structures of the constructed separative self in order to unveil the one heart.

In his poetry there are consistent references to the insanity of societal, religious and gender segregations.  His poems are devotional and mystical, they embrace feelings of mystical longing and sorrow upon the path. But they are more than mere mystic sentimentality.

Ravidas brought together the mystical and the mundane structures and how they interrelate and even cancel each other out. His radical approach in the rampant sectarian society in which he roamed created an aura of freedom in him that inspired everyone he met in his wanderings.

Ravidas’s style of mystical poetry was so influential that he was emulated by other Indian poets after his lifetime, many of the disciples of his poetry were so devotional to him that out of respect they would assign their writings to Ravidas.

The best known disciple was the mystical princess poet Meerabhai. She composed some of the most beautiful verses of mystic poetry to ever grace the Earth. Many of her verses have found their way into contemporary song.

The princess Meerabhai wrote deeply about the longing for the true vision of the unified heart. Though the message in her writings is hidden under romantic symbols, her message was the same as that of her inspiration and Teacher – the great Guru Ravidas – the message of love and the one vision of unity, both within and without. Ravidas was a true Tantric, he saw the absurdity of so called elevated spiritual ideals being proclaimed – but not being mirrored into outer life. He saw through the empty agenda of the high class power hungry religious elites.

Kings and princesses sought the company of Ravidas, this was a radical maneuver in itself. As Ravidas was labeled within the so called lower classes. The higher classes were deeply troubled by the fact that a spiritual teacher could be of lower class. This might sound like it is of little matter to our ears these days but it is something quite profound. Even to this day the elite classes in the majority still believe that a so-called person of lower caste can not be a spiritual teacher, women are equally considered lower class and barred from the elite patriarchal orders of the priests.

The role of priest and guru is reserved to higher classes. Things may have changed somewhat, but in the times of Ravidas it was unacceptable that a cobbler was a spiritual teacher. Scriptures and rituals were hoarded by the higher strictly, wisdom that had power was  not shared but kept within elite circles that oppressed lower classes.

Ravidas’s message showed his vision that if such wisdom is exclusive, then another and more inclusive and cause for social oppression, then another way of wisdom was needed. He rejected the codes and forms along with their corruption for the vision of Tadaruup, that is: there may be many beats, but there is only one Heart.