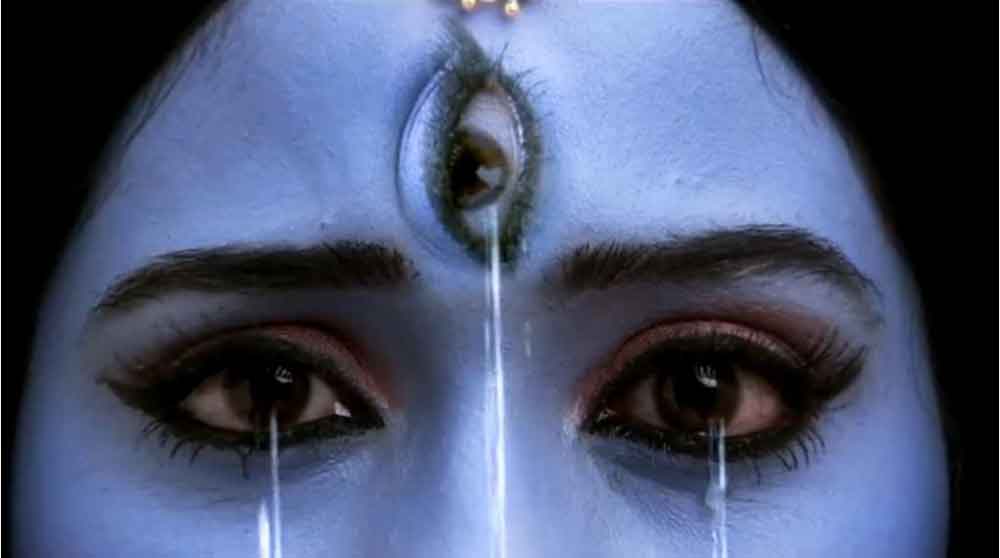 Her name translates as the bringer of vegetation. She is twilight blue in colour and she brings the gift of herbs, fruits and vegetables to the earth.She is the revealer of nourishment and growth.She is the great mother of nurture who brings magical growth to the garden of our souls.

The first rising half Moon of the year, 20th of January, signals the beginning of Shakambhari Navaratri, the nine nights of Shakambhari. For Tantrics, these 9 nights are a time of studying deeply the order and disorder of our inner garden.

Shakambhari is depicted with a thousand eyes from which she waters the garden of our soul, reaching even into the most dry cracks and corners. She brings the latent seeds of our secret innermost life into flower.

Shakambhari’s powers culminate on the 9th night, upon the Full Moon of the 28th, when she is in her full power, on the day known to Tantrics as Shakambhari Jayanti. At this time, celestial forces are conspiring to begin awakening nature after her yearly sleep. Being ourselves part of nature, these forces act upon us and afford us an opportunity to tend our spiritual garden.

The story of Shakambhari
tells of the law of exchange,
of the psychic & physical draught
that befalls us
when the reciprocal
laws of exchange
are not honoured.

Tantric cosmology tells of how the world of spiritual forces, intersects with the physical plane by a law of reciprocity. The spirits depend upon us for sustenance as we depend upon them.

If we dissociate ourselves from the spirits then we fall into psychic and physical famine as the story points out.

Shakambhari is also revered as the keeper of the secrets of herbs and their medicinal use, precisely because she mediates between the spiritual and physical world by means of the law of reciprocity. She reveals the science of healing by showing how a herb and a food has a different effect upon the system according to which Moon phase it is imbibed upon.

Shakambhari is the great balancer and nourisher, she balances dryness and moisture. The balance of dryness and fluidity in the human mechanism is of utmost importance to Tantrics. Tantra has a whole science of practices connected to working with dryness and moisture, by honouring the fluidic movements of the Moon.

When the psychic and physical nerves become dry there is not the capacity for the human organism to contain Shakti.

Some substances and practices are extremely heating and create dryness, this is to be balanced by working with the Moon and especially working with the 3 fluids that comprise Soma, that is Milk, Blood and Water. Soma balances dryness and brings softness and the feminine into our orbit.

Once upon a time a great draught was upon the whole of creation. The draught was so severe that it traversed the 3 worlds: conscious, unconscious and earthly. The Draught came into being because the people of the earth plane had stopped to give honour to the spirits and fallen into dryness. The fluid of Soma did no longer flow and in utter dryness Shakti did not have a place, for she lives in the place where fluid and dryness is balanced.

The sacred ways had been forgotten and the spirits who depend upon human interaction for their sustenance were drying out for lack of prayers and offerings. The dryness of the spiritual world was reflected upon the earth plane. All around things withered. As the spirit world grew dry, so did the earth, right down to the very underworld, the great famine enveloped.

The story tells of how there were few people remaining upon the earth who still knew of the importance of giving honour to the upper and underworld spirits. These last few adherents to the laws of nature and magic were the original Tantrics. Legend has it that together they formed a circle and prayed with their united concentrated spirits. They believed that Soma could still flow and heal all worlds. And so, upon the first rising half Moon of the uprising year, they gathered together in concentrated ritual and prayed to the Goddess for help.
The Goddess was nourished by their Love and longing and she took form as Shakambhari. She nourished them in return, for this is the Law of Exchange that is central in Tantra.

The dividing line
between the two halves
of dark and light
becomes a meeting place
of polarities
& a place where spiritual forces
can be invoked.

Shakambhari appears on the half ascending Moon of Shakambhari Navaratri (20th of January) in response to prayer, and she comes into her full power on the Purnima (full Moon, 28 January).

The story of Shakambhari tells of the importance of compassion and nourishment. She appeared with a body covered in a 1000 eyes and, as she saw the dried out plight of the creation, she began to weep tears of compassion for the suffering of the world. Her many eyes wept for nine nights, in which she poured Soma into the three spiritually barren worlds and restored full moisture by the Full Moon.

She brought fruit, vegetables and herbs, she restored the rivers and the seas and sprinkled the earth with flowers.

Shakambhari Puja is a ritual of finding that for which we hunger and thirst for, her ritual goes even further to look into the reason for the inner hunger,

Shakambhari can teach us the laws of nourishment and fortification. She brings healing to our relationship with nutrition on inner as well as outer levels. Shakambhari reveals to us the laws or reciprocity, that in order for the garden to grow, we have to water it.