May New Moon & the Crow of Tantra

“On the May New Moon (friday 22 may)
the Tantrics sacrifice themselves intentionally
& practice very harsh Hatha austerity
that is a great effort to execute (tapasya)
and raises unresolved issues.
The purpose being Healing.”

The subject of the Crow Moon is extensive.
Here we endeavour to keep it within the Context of Tantric practice, using the name Shuni, Saturn and Crow interchangeably as they refer to the same one.

Tantric law dedicates this coming dark Moon to the Crow.
They refer to him as Shuni the planet and God Saturn. Shuni Kah the Crow man, master of darkness and the unseen.
Tantra regards Shuni as the master of all the planets.
He goes by many names such as Babhru.
Shuni is the force of weight and darkness.
Taking the form of a dark intense man who rides upon Crow, Shuni is overbearing, majestic, mysteriously and fearsomely – punishing and spellbinding.

The Orthodox name of this festival is Shuni Jayanti,
Which refers to the Birthday of Saturn.
Religious rituals and offerings are made to appease the Planet Saturn who is known by the name Lord Shuni.
Prayers and sacrifices to lift relentless afflictions are paid for with austerity.

On this day the Tantrics sacrifice themselves intentionally and practice very harsh Hatha austerity that is a great effort to execute (tapasya) and raises unresolved issues.

The purpose being Healing.

This is the best day of the year in the Tantric calendar to work on your most obstinate afflictions.
Whether it is physical or spiritual or anything else. The Saturn energy opens a portal to the underworld and can release long entrapped spirits.
This is an ancient festival of India and is based on planetary currents and lunar and celestial constellations that make this work of facing the underworld more effective at this time than on any other.

Shuni Kah is the Crow man. He is tall with humanoid body and head of crow. He visits in dreams and is a good omen, terrifying but a friend.

Tantrics who meet
with the inner planes of Shuni Kah
are approached by Crows.
Those who go very deep
on the path of the Shadow
are befriended by Crows.

The Crow is a creature of very special vision and sees people in another light. Crows shun those who Shun the Feminine underworld and in favour the solar plane.
A person who is in touch with their shadow will have crows eat from their very hand.
There are some Tantric Shamans who have this Siddhi.
They are the very powerful healers who are able to locate the shadows that create distress for people and bring blind dark spots to awareness in people so healing can ensue. Spending long periods in the dark gives one this Siddhi.

WHAT WE FEAR HAS POWER OVER US 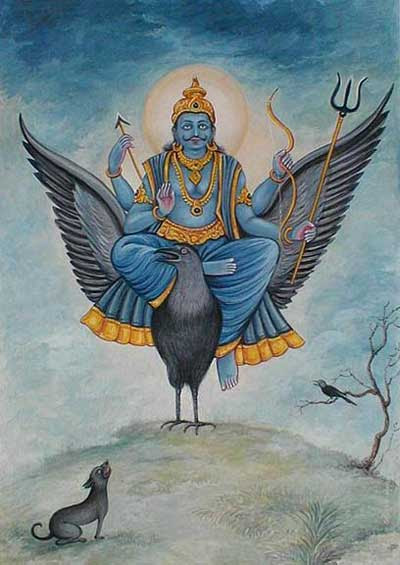 What is refused must be met courageously.
The shadow it may be called.
It is a dooorway to wholeness.
So called ‘bad’ arises
when the shadow is repressed & refused.

To cut the light from the dark is something that Lord Shuni will never allow us.
Saturn’s affliction gets greater the more it is turned from and unfaced.
Many of the remedies and rituals of India for appeasing Shuni are all about ways of getting us in touch with our repressed feelings.
Whether it is a ritual, mantra, gemstone or austerity.. the main focus of these things in relation to Saturn is that they are such as to bring an awareness of that which we do not see.
The Hatha Yog practices that raise the unconscious forces are undertaken at this particularly favourable moon phases. They are the inner and outer Crow Mudras and The Chaya Karana practices of the Shadow.

It does well to reflect on the matter of the underworld within us. We might have a lifetime of judgement upon this part of ourselves as an unholy or bad place, whatever we might think of it. The Tantric axiom of  ‘’What we Fear has Power over us’’, would be worth to ponder.

Shuni Kah is the Crow of the Dark Moon who has access to the never regions. He is the one in us to bring the eye to the underground sediment that toxifies our lives. If this unresolved sediment it is left in the unseen world there is no healing.
Shuni Kah the Crow and gatekeeper to the world of dreams is the grand healer.
Just singing his name is a powerful mantra that causes us to see in the dark.

The Mantras related to the Crow use specific bijas or seed syllables that activate the unconscious sides of our Chakras.
In Tantra they are secret Mantras that are carefully handled as they have very strong effect to arouse the latent spirits.
They resonate sound vibrations and activate the shadow Nadi’s (meridians). This is a an undertaking that must obviously be handled with care.
Much of the Tantric path of healing involves bringing the spirits that rule us from the unconscious to the eye of awareness.

Left hand Tantric practice
is very much under the rule of Shuni
& such practices raise latent & unfaced things
from the underworld.

Shuni raises the darkest shadow and latent karmas from deep in the unconscious.
Shuni’s face is black because he dwells in the dark and unseen, he is a slow moving planet and this slow movement represents a very important theme in Tantric practice…

When the rhythm & speed
of our inner life is slowed down,
it becomes simplified
& the things that escape the gaze
are brought into view.

In this way, Tantra shows us what we do not always see and also what we don’t want to see or perhaps fear to face.
When we pursue the practices of breath, Mudra and mantra, the energies of superficiality and rushing of body and spirit are brought to the slow pace of Saturn. Then the dark face of Shuni reveals that which dwells in the shadows.
Shuni sits on a throne of black bone behind the veils of boredom. He brings suffering and strife and throws the unresolved pieces of our life right in our path, some pieces are sharp and heavy and cause us to fall. To go on in the path the pieces have to be put in order and the burden must be borne.

THE ENTRANCE TO SATURN

The entrance to Shuni is through the femminine. His Mother is Chaya, the Shadow Woman, and his father is Surya, the Sun. His Mother was not able to realise her power beside her Husband, the sun, for his glow burned and make her feel overwhelmed and insignificant and so she fled leaving behind her shadow.
This signifies how the Feminine is brought into insignificance when the Solar or active force is ruled over her.
Having left her Shadow with her husband, Shuni’s mother whilst still pregnant performed prayers and yogic austerity to Shiva under intense heat. Her effort was so great and the heat generated became so hot that her child, Shuni, was burned black.
This signifies how heat and tapasya (yogic purifying Fire of austerity) reveals the darkness within the unconscious recesses of one’s being.
When Shuni was  born and seen in his blackness, his father was shocked at how dark he was refused to recognise him as his child, accusing his wife of being unfaithful. He raged greatly and insulted his wife.
Seeing his Mother thus insulted raised Shuni’s wrath!

Shuni thereby cast a single glance
upon his father, the sun,
which made him lose all his light
and turned the previously radiant father
to utter blackness.

This represents the astrological impact of Saturn and why he is Known as the Dark planet, when he appears upon the sun in astrology all light is darkened and the unseen is hilighted.
Saturn has the ability to take away all light within us and take us into the parts of ourselves that have previously not been seen.

Some Tantric methods of working with the Shadow
eclipse the solar vision and make us aware
of the spirits of the unconscious world
that colour our lives.

By seeing and addressing these forces, they are brought to the alter of the soul for healing.
The fact in the story that Shuni’s gaze Is invoked by seeing his mother insulted hilights a very important Tantric point that Shuni is the protector of the Feminine. His slow Tantric rhythm is punishing and crushing if the Feminine is not honoured.
Shuni means the punisher.
The subtlety of this symbol conveys how if we ignore the Feminine rhythms of our being we will face great darkness.
Tantric law is the protector of the Feminine mysteries that our civilisation and culture might blindly ignore at a price.
By following nature we become a Tantric and restore inner order.

Shuni’s wife was very fine, she was from the from the star constellation Gandharva and was the grand mistress of all the Feminine arts.
This points deeper into his roll and connection to the Feminine mysteries. The one who by his slow dark rhythm allows the Feminine to open.
One aspect of his wife is so intimate with him that she lives within him in oneness.
The myth goes that once when Shuni was in deep meditation on Shiva his wife was menstruating (touched by the Goddess, as it is known in Tantra). She craved his attention and became angry and felt ignored as he was absorbed in samadhi.
The Feminine wrath was aroused and she proclaimed that his gaze be ever down cast and whomsoever he would gaze upon be brought to great suffering.
Thus Shuni’s gazes is ever down in the underworld and arouses suffering.
He Rides on the Crow and his wife rides on the Swan.
One is the bird of the underworld and the other is the bird of the Celestial spheres.

The completion of Tantra
is known as the Kiss of Crow & Swan.
The meeting of opposites.

Tantrics have since eternal times attempted extreme measures in order to become like Shuni, with roots.`

Whether it has taken the form of ritual,
meditation or Yog,
the principle of austerity in the Yogic sense
is to go to the places one does not know of…
it is a path of utmost effort to undo oneself.

Shuni is the most austere of all the Yogis.
All Tapasya (effort) is done in his name.
The myths tell of many yogis and gods attempting to reach to the stature of Shuni. But his rhythm is so slow that it is crippling and misses not a single thing.
When we slow down the rhythm to his – we see everything.
Shuni is the King of austerity.
Suffering may crush the heart but the crushing force is what makes a diamond.
There is no way around suffering. The diamond like stars that shine through the dark night sky take voyage through the dark. It is known as the path of Karma.

Suffering and blocks in our destiny are simply pointing us towards that which need to be resolved. And the path of Tantra can show us the way.